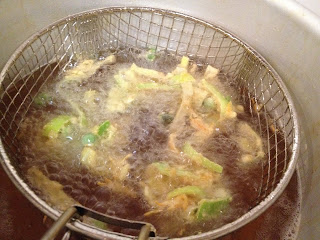 Mr frillypants is English...  so he knows ALLLLLL about Indian food.  Right?  I was googling for some chickpea recipes and came across Onion Bhajis and I know Mr frillypants loves these... I thought "Why wouldn't leek work???"

Of course the original recipe used all sorts of aromatic spices,  but these were seriously delicious without them.  Don't tell anyone,  but I have a deep fryer... (shhhh!! I know!)... but you can use a saucepan with a good amount of failsafe oil.  I like Rice Bran Oil especially for frying as it has a high smoke point.  The bhaji do need room to fry though.

Chickpea (Besan) flour is available at healthfood shops,  but if you have a Thermomix,  just  grind dry chickpeas (not canned) on Speed 9 for a minute or so.  The water measurement is vague...  I used 80 mls and then kept adding until I could use it.

Verdict:  As usual,  the kids are divided.   It's a texture they're not used to,  so it is my duty to serve it again and again until they are used to it.  Ms C, Mr frillypants and I were a bit like 'You don't like it?  GOOD!  More for me!!!  Pass that bowl over here'