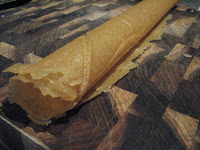 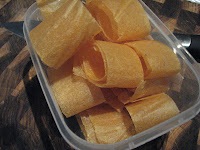 This is from the Failsafe website... but learn from my mistakes.  :)

Ingredients:
Method:
Verdict:
Everyone is very excited to be having 'Rollups'.  I can see that the teachers may not think that this is 'brain food', but I'm just going to have to go and talk with them again.  Won't they be surprised to find it is pear, only pear and nothing but the pear.

Tweeks:
Oh my goodness,  I made so many mistakes doing this.

I tried to dry the pear purée,  but the baking paper I used just got soggy and tore apart.  Messy.  At first it was just too thick...  and when I say 'at first' I mean after four hours!!!  (I'd hate to see the electricity bill after all this.) I touched it to see if it was dried and my finger just sank into the puree!!!
Gah!  So, I scraped it all off and re-spread it much more thinly on 3 trays instead of 2.   I started off at 75 degrees,  but then went to 100.  That might just be my oven though.  The extra thin trays were in the oven for somewhere between 3 and 4 hours, with us just checking it until we decided it was ready.  I have stored these in the fridge, but only since I'm playing it safe.  I suppose it should be okay in the pantry??

Pesto on chicken sticks,  for a Summer BBQ Ingredients: Parsley- handful of leaves Raw Cashews - approx 100g 1-2 cloves Garlic Sea salt - about 1/2 teaspoon Citric Acid - 1/2 tsp Oil Method: Place cashews, parsley, garlic, salt and citric acid into TMX (Or food processor??) and blitz it!  Speed 7 until it's all pulverised. With blades still going about Speed 3 , slowly drizzle in oil until you have the desired consistency So far, I have used this recipe as a crust for Lamb Loin chops. and to stuff some chicken.  I'll let you know if and when I do some more.

Sandra's No-Tomato Sauce I have been using this all over the place...  and a bit like the Deli Chicken,  it has helped save Failsafe cooking all over again.  People on the facebook Failsafe pages are talking about it,  it has been translated into Thermomix-ese on the "Something From Nothing" page and here's mine. Oh,  but first,  here's --->  Sandra's original . Ingredients : 1 tin Red Kidney Beans, drained and rinsed 150g Pear, about 2 large halves 1 teaspoon Citric Acid 1/4 cup (50g) Brown Sugar 1 teaspoon Salt 2 medium Carrots*, peeled and roughly chopped 1 stick Celery, roughly chopped 4 Spring onions roughly chopped 3-4 cloves of garlic 1/2 cup Water Method : Add all ingredients, except water, to TMX and pulverise on Speed 8 for about 5-8 seconds Add water With MC in, cook for 25minutes,  Speed 3,  100ºC Purée by gradually increasing to Speed 9 for about 15 seconds *Moderate Salicylates Verdict :  When I first tasted

Mr frillipants' mum gave me this recipe, which really is the easiest-peasiest thing ever. I am in the habit of making this with most roasts now, whether it's red or white meats, and it tastes so yummy with the meat and roasted veggies.  The recipe that I have says cooking time is 40-50 minutes,  which is seriously wrong. No idea where they got that? What I normally do is, when I have taken the cooked meat out of the oven to rest, and the veggies are still cooking, I put my 12-hole muffin tray in to start heating up.  I've already put a tiny dribble of a failsafe oil into each cup.  After a few minutes, I take the hot muffin tray out and, working very quickly, I pour the batter into each cup to about 1/3 full.  This will fill all 12 cups, giving the frillipantii 2 each... because we're greedy-gubbinses when it comes to Yorkshire Puddingses. INGREDIENTS 125g plain flour 2 eggs 1 tsp salt 275g milk METHOD Put all ingredients into Thermomix and mix